It is truly amazing what lengths people will actually go to for the sake of achieving a dark tan. Many choose to bask for hours on end in the dangerous sunlight at beaches across the globe, while others will apply fake tanning gels and creams, and still others engage in spray tanning. However, there are many people who now are turning to another form or method of acquiring a fake tan – that of tanning injections (melanotan).

Supposedly this Melanotan can mimic the activity of a natural skin hormone and stimulate skin cells to actually secrete the pigment that gives skin its colour known as melanin. 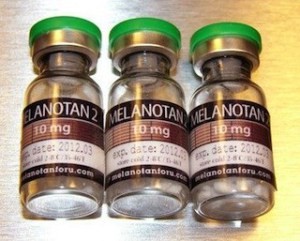 Though all of this sounds so inviting, the truth is that it can be remarkably dangerous. Injecting this Melanotan into your body can actually change the appearance of moles or freckles that people have on their body. It has not yet been proven whether or not these changes are permanent, but indeed the moles and freckles look different and we all know that one of the first signs of melanoma is a change in appearance to any moles or freckles you may have on your body. Many people refer to the injection as a perfect tan in a bottle, but they don’t realize the true cost. Melanotan is unregulated and is very dangerous.

The injection promises to leave people tanned and stimulated. It is designed to stimulate the pigment cells in the body to produce even more melanin than normal, thereby giving the user a dark tan. To date the dangers and serious side effects of the chemical have not been documented, but because of the simple fact that the injection of this powerful chemical can actually change the appearance of moles and freckles implies that it is, without a doubt, absolutely dangerous. Common side effects include nausea, appetite loss, sleepiness, stomach cramps, facial flushing with some other expected reactions ranging from allergic reaction and acne to dizziness and extreme sickness.

Reactions to drugs vary obviously from person to person, but surly these side effects should be enough to put up a red flag on using these injections as part of your tanning regimen. Studies and extensive research that has been conducted to date coupled with a wide range of concerns openly expressed by dermatologists and a variety of other prominent physicians who are fearful that injecting Melanotan into your body can be linked to heart, brain, and kidney problems, as well as the ever common skin cancer have caused major concern for many. How true it is that vanity is a powerful force which means that even those people who are typically fearful of needles will go to the extreme and overcome their fear for the mere vane act of getting a glowing tan.

It seems that there are so many people who will do just about anything, even those things that are obviously dangerous, to make their bodies beautiful and appealing. In many cases, however, the harmful products and procedures that are available today may very well only provide for that body beautiful in a coffin and if that’s the case, then is it truly worth the price?