Sadly, the consensus nowadays is that sunbeds might just as well be coffins. Studies and most oncologists firmly believe that sunbeds are the number one reason for the high number of young women who have been diagnosed with lethal melanoma. Unfortunately, these young people seem to believe that indoor tanning rays that are used in sunbeds are harmless to their bodies and that they may even be healthy when, in fact, it is just the opposite.

There are millions of people who visit tanning salons every year. The majority of those people, truly more than 70%, are white Caucasian females that fall between the ages of 16 and 49 years of age. With nearly two and a half million teens that visit these tanning salons in the UK, there is grave concern for the risk of health to our children. A recent Swedish study has revealed that the younger you are when you start using these sunbeds, the greater your risk is for developing melanoma.

Reviews of several other studies have also revealed that the risk of melanoma is greatly increased, nearly 75%, if you have exposed yourself to the use of sunbeds prior to the age of 35. Because of these astounding studies and their findings, the World Health Organization has called for teenagers to be completely banned from using indoor tanning salons and sunbeds due to the proven dangers, but sadly, only half of the states within the United States have adhered to the request and regulated the use of sunbeds by teenagers. 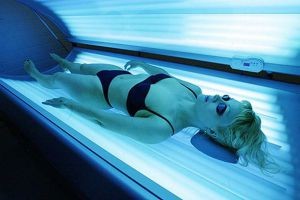 As a result of all these findings the United States Department of Health and Human Services has determined and labelled UV radiation from the sun, sunbeds, and sun tanning lamps to be a carcinogen, which, as we all know, is a cancer causing substance. Further, the FDA and the Centres for Disease Control highly advise people to avoid tanning and sun tanning lamps. There are several associations and administrations that are currently fighting to ban tanning equipment that is not used specifically for medical purposes.

The American Medical Association and the American Academy of Dermatology as well as the Food and Drug Administration, the United States Department of Health & Human Services, and the Centres for Disease Control are among the top most highly recognized organizations that are seeking to have these sunbeds banned altogether. Bottom line – there is no such thing as a safe tan. Beware of falsely represented sunbeds.

Certainly every scientific study performed to date has confirmed that sunbeds are directly linked to skin cancer. Isn’t that reason enough to avoid using them so as not to hinder your life expectancy for the mere pleasure of a glowing tan.